What I like about being on the autism spectrum

Being with autism can bring with it difficulties regarding socialising, communication, language and speech development delays. However, as I got older and a better understanding of it, I began to recognise several positive traits to it. The traits that I like about it in relation to my personal circumstances are outlined below.

I like to read about subjects I’m passionate about, astronomy being a good example here. It is here where I may pay attention to obscure details which very few people are likely to know. Details could include the names of the nearest star to the sun, star clusters, the locations of various stars and constellations(star patterns) in the night sky.

Being a visual thinker helped me to understand the concepts of fractions in mathematics better. See the link here to the post about how you can teach maths to children with autism. You should get an idea of what some fractions look like compared to others visually.

Being able to do difficult sums without a calculator, which lots of people may find very difficult themselves.  Some things I did included calculating the number of hours, minutes and seconds in a year. In addition, being logically minded helped me to be good at learning foreign languages, since they involve grammatical rules when putting words together to form meaningful sentences. This leads me onto the next trait below.

This is another way which has helped me to become good at languages, being able to recognise what certain foreign words mean in English. In addition, I’m able to memorise the written music for certain songs and play them on the piano from memory.

During one session on a computer course I once did, the group I was in were given a model of a lift connected to a control box. We had to get the lift moving, which was the easiest part of the task. The hardest part of the task was to get it to stop at a particular floor, no matter which level it was called from, which I managed to figure out by getting the system to recognise when the lift was at a certain level.

Thinking up ideas for and writing stories. In addition, I can come up with creative ways to overcome certain limitations. An example here is on a computer where I recognised that one can put different shapes together to make recognisable objects. It is in the image for the blog post concerning how children with autism could be integrated into mainstream school. It is here where I used squares in combination with triangles and put them together to make coloured pencils.

There have been difficulties in relation to my language development delays, which have had an effect on my education. This had meant it would be harder for me to understand and apply new knowledge, and to achieve grades I’d be satisfied with. It is these difficulties which fuelled my determination to improve myself here regarding my language and general understanding. I now feel confident enough that my language improvement has given me the confidence to put my creative mind to use in the form of my own short stories.

Being in a quiet area and listening to the birds and other sounds like the wind helps me to be calm and collect my thoughts together. It is in situations like this where my creative juices can really get flowing. 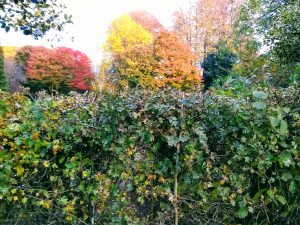 I sometimes get opportunities to photograph weather and nature related photos, especially where there is plenty of colour, as a scene of a variety of colours for me represents the beauty of the autism spectrum, which includes the wide range of abilities and personalities of us on the spectrum along with challenges we face. This has also helped me to appreciate and respect how we’re all different and unique in our own right.

By devoted to various causes. An example here was when I joined a music group at a local church where I would remain for many years until the church closed and the parish was amalgamated with a neighbouring parish. After this, all parishioners from the old parish went to different churches in and around the local areas.