Learning to read and write with autism

Because of my delayed speech, language development and understanding, I experienced difficulties with reading, writing and comprehension. My vocabulary was also rather limited too. I didn’t really understand that things like nouns were to do with naming things. In addition I didn’t fully appreciate that adjectives were words used for describing people and objects of everyday life, such as what they are like and look like.

My reading, language and comprehension test marks were lower than one would expect for a child of my age. Whenever I read a book I would read through it without appreciating the need to think carefully about what I was reading. Just simply reading through pages of continuous prose was a great achievement from my point of view, but I mostly had a poor understanding of what I had read. 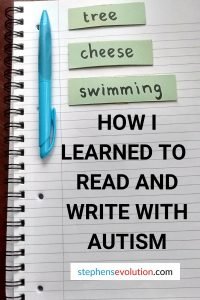 Activities to help with reading and writing

Below are examples of activities which I feel proved beneficial to me when one supported me in trying to improve my reading and writing skills. And whatever may prove beneficial to one person may not necessarily benefit others. Having said that, there’s nothing to stop you using these or using them as inspiration for your own ideas to help you support others. 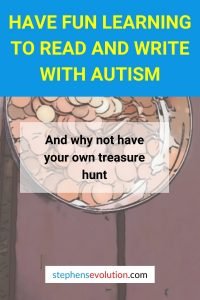 Sometimes at home there’d be written texts in small boxes leading to other boxes(this was my mum’s idea), eventually leading to the treasures themselves, which were chocolate bars. For me here, it was the sense of being on an adventure exploring new places, and the excitement of discovering new and unknown things.

Books which interested me included ladybird books.  One of them was about some cats called Smoke and Fluff, which had much more in the way of illustrations to back up what was being described. The MisterMen similarly drew my attention too, in particular Mr Clever. Mr Clever was one of them who had clever and innovative things in his house. At the end I felt rather sad and disappointed he was unable to show the other MisterMen he could live up to his name. Mr Tickle was another of my favourites, since I imagined arms that stretched out to tickle unsuspecting people. I liked the Noddy and Big Ears series by Enid Blyton, especially on the tape recorder. Nowadays we can access books on audio

I developed a keen interest in the nature table. I liked to read books by Angela Sheehan, which gave an insight into the lives of various animals, including frogs, squirrels and the bumblebees.

Check the link below to search for more ideas about how to get children into reading more. 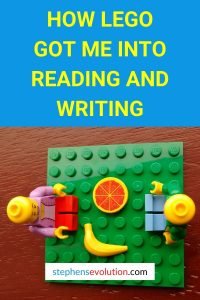 One thing I liked to do was to build things with LEGO bricks. I liked to build tall LEGO houses with long gardens. I’d imagine the house was mine, sometimes inviting LEGO friends and going on adventures around the place and surrounding areas. I’d imagine having included a grand piano inside, since I have an interest in music and piano playing. Another interest of mine is astronomy. On the roof I’d construct what represented large telescopes, and picture captivating views of faraway objects, especially in space. For the picture to the left a short story could be something like below the bold text. This scene was my own idea.

A pandemic has spread throughout the world, disrupting people's lives in many different ways. However, restrictions had now been eased, allowing more people to meet up in larger groups. On a nice warm and sunny day, two friends decide to meet up in a local park for lunch.

Character 1: I just can't tell you how good it is to be able to meet up again. It's been too long.
Character 2:  Yes, me too. Can't wait to taste this new pizza everyone's talking about.
Character 1:  Yes, it certainly looks and smells delicious.

And so they shared the pizza together, and weren't disappointed.

Character 1: I must say that was the tastiest pizza I've ever had.
Character 2: I couldn't agree more. For me it was certainly worth the wait.

Nowadays,  the advancements in technologies to date have afforded us opportunities to record and edit our own mini-moves, something we didn't have during my childhood. This is something I would have at least had a go at if the relevant technologies and tools we have today had been available back then. I haven't done any recording and editing myself, well not yet anyway, but in the future, who knows?

Check the link below to find out more ideas about how to get children into reading and improving their creative side.

In terms of phonetics I became confused when seeing words like Geoffrey and Jeffrey. I felt there was only Geoffrey and never thought there’d be words spelt differently from one another, but sound alike. One word that surprised me was women.  Judging by its sound, I thought it would be logical to think it was spelt wimin. With woman it was a similar situation, which I thought would be spelt wuman. Communication with one of my junior class teachers at school included recommendations of phonetics and related words.

Me and my mum worked together on those. I’d have my own test in the format of a quiz on them, based on a favourite quiz show at the time (I’m pretty sure it was called Masterteam at the time, back in the later 1980s), along with a suitable list of books for me to read from my class teacher.

Use more in the way of pictures and illustrations

The Smoke and Fluff series I felt were more ideal for me when it came to reading. It was in these books where there was less in the way of written text and more in the way of illustrations to back up what was being described.

I saw myself as more of a visual learner. My mum had once been a primary school teacher herself and was very child orientated. She’d find comic type pictures and encourage me to describe in my own words what was going on in them. She also encouraged me to write stories based on my interests and experiences. One story included me imaging myself being a ghost going round the place and frightening unsuspecting people. From then onwards, in combination with the above approaches, there was a marked improvement in my spelling, writing and reading.  My sentences became less repetitive and confused, and more logical and descriptive over time.

Figurative language like idioms didn’t help my case either, especially as I took a precise view of language. See the links below to see methods you may be able to use to teach idioms to those with an autism spectrum disorder.

How to teach idioms to kids with autism

Having autism can lead to difficulties learning and developing language skills because of the way one may relate to and communicate with other people. However, with the right guidance and approaches, there’s no reason why satisfactory progress can’t be at least made here. And finally, the ideas I've mentioned in this post are based on my knowledge and experiences. Having said that, I'd be interested to hear any other ideas and experiences here from you too.

5 comments on “Learning to read and write with autism”