Improving my understanding of other subjects - history 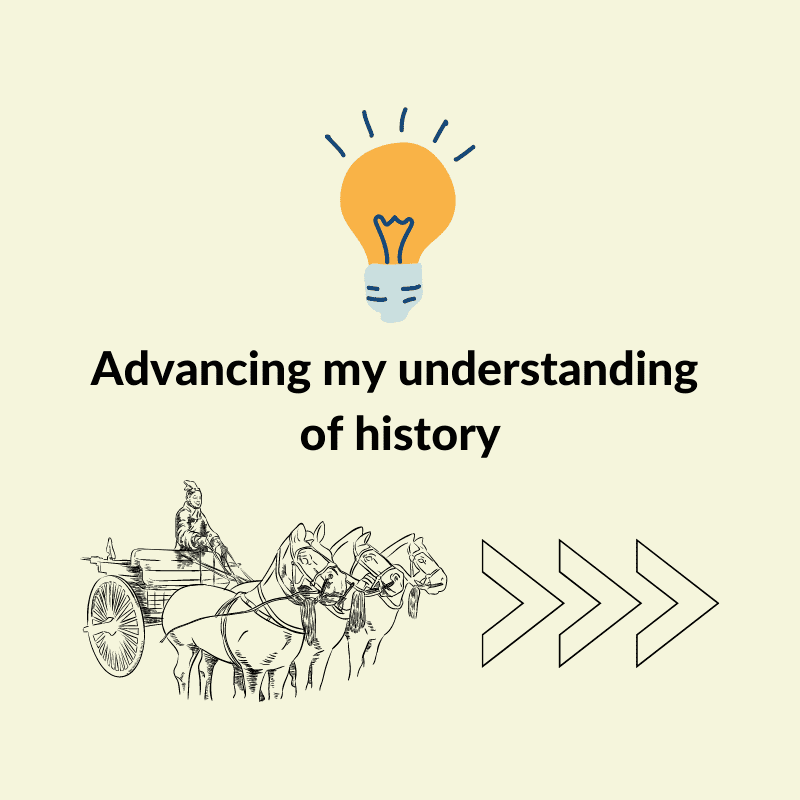 PinHistory was another of those subjects that I’d find more difficult, as it involved more in the way of reading and processing language, and understanding written material. It is a subject where one may be required to understand and interpret facts and evidence from written and visual sources. Questions can require you to analyse evidence, with responses more in the way of continuous prose.

In my words, the subject of history is the study of significant past events, and their important impacts on society in general, including the way we live our lives.

Nowadays, when I look back on history, it has to do with gathering and studying various pieces of evidence such as pictures and accounts, as well as having historical knowledge.

I now find it interesting to know how historians may draw comparisons between all sources of evidence to arrive at their own conclusions and judgements. They may try to establish any links between the sources, much like trying to prove one’s guilt in a crime. They may agree with one another, or have conflicting views regarding what may have happened during significant events of the past.

Despite my linguistic limitations, I still managed to produce credible pieces of extended writing, helped by the fact we studied topics such as the Industrial Revolution. Looking back, that topic featured high on my list of fascinating historical topics. These are made even more interesting by the fact that I consider my language and understanding to be more advanced now compared to my school days, and now use this to write my own account of the Industrial Revolution.

This event occurred on the 5th November 1605, when a man named Guy Fawkes tried to use gunpowder to try and blow up the Houses of Parliament. I also found this interesting, since it helped me to understand why we have fireworks and bonfires on 5th November each year here in the UK.

The Industrial Revolution was a time of great change, especially from a technological point of view. Coal burning led to rapid increased demand for coal. Textile factories opened up near supplies of water and coal so machinery could be powered.  The coal was burned to heat water to make steam in order to help turn the machinery. This enabled clothes to be made more easily and quickly in order to meet increased demands.

It also helped that the factories were located in the hills. The gradients downhill led to water flowing at higher speeds, helping the machines to work faster.

As machines became more efficient this meant that there was less need for skilled workers.  Women and children were seen as cheap sources of labour, and the conditions in the factories weren’t exactly good. 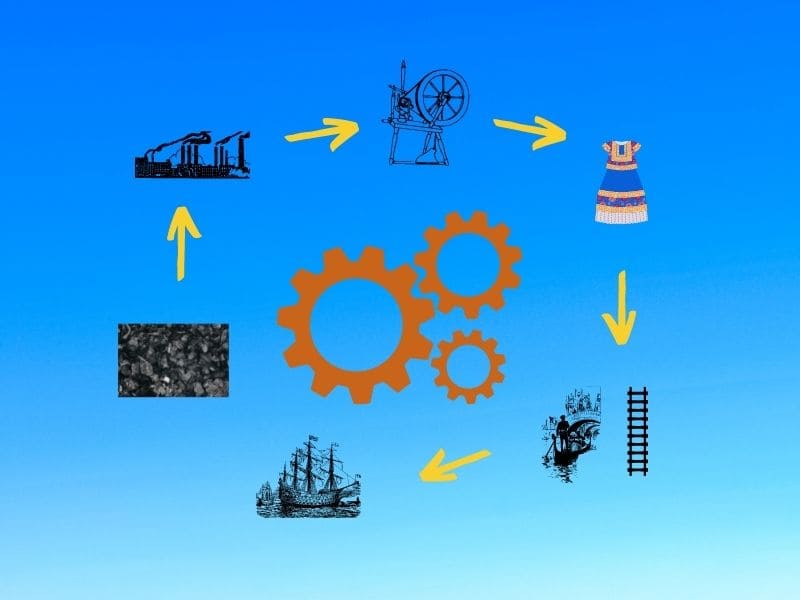 For those working in the factories the wages were low, which meant  long hours would have to have been worked for people to have a decent living. There were not many breaks, and the factories were dirty, damp and dark. Children would get tired, start working more slowly, make more mistakes, and incur strict punishments as a result.  Smoke from the use of coal would have led to people developing breathing and eye problems.

Some historical sources show machines to be uncovered,  which would convince one that accidents would be more likely to occur. Young children would have been especially vulnerable here.

Acts were brought in to change working conditions, including reducing the number of hours worked per day to 8 and not permitting children under 9 to be working in the factories, and allowing them time for schooling. Routine inspections would be carried out by appointed inspectors to see that improvements in the conditions in the factories were being maintained.

The Industrial Revolution led to an increased demand for coal, and coal mines would become more dangerous, especially as miners had to dig deeper and deeper. This increased chances of mines collapsing due to the sheer weight of coal above, only supported by wooden beams called props. Floods from heavy rains posed in additional hazard too.

Other hazards included build up of poisonous gases, and sparks from naked flames used as light sources and any miners digging coming into contact with gases resulted in explosions. One Invention was the air pump by a man named John Buddle which improved ventilations. The Davy Lamp by Sir Humphrey Davy meant miners had light without exposed flames. This particular lamp’s design was such that it had a gauze which prevented any heat given off from coming into contact with any gases present in the mine.

Turnpike trusts. These were tolls set up to charge people to travel on the roads and use the proceeds to go towards improving the state of the roads, eventually making it easier to travel along more quickly over time.

Canals. One famous canal known  as the Bridgewater canal was built in the northwest of England, UK, close to the cities of Liverpool and Manchester. Canals would mean coal could be transported to factories as machinery used to make any clothes used coal to power them.

Furthermore, when clothes were made and sold,  they could be transported down the canal to Liverpool, where they were then loaded onto boats which took them to other countries like America.

Railways. A man named George Stephenson was famous for his locomotive known as ‘The Rocket’. He also constructed the Liverpool to Manchester railway. Railways became another means of transporting goods manufactured, helping the economy to grow faster.

As the number of ways goods could be transported increased along with increased speeds and further distances possible, economies could grow. As towns and cities grew in size, populations grew, and the number of jobs increased. Numbers of houses would have had to be built so that the workers could live closer to their jobs, transforming areas of open land into more built up areas..

The increased populations would have obviously meant an increasing need to provide more food in order to meet the needs of the growing population by improving the yields of crops. A man named Jethro Tull invented a mechanical seed drill which would go a long way to fulfil that requirement.

However, these increased populations in towns and cities would have led to the rapid spread of any diseases. Hygiene measures weren’t very adequate, and toilet, washing and drinking facilities were shared by many people. Increased populations would have meant more rubbish left out on the streets. Houses had poor ventilation, and  there were inadequate drainage systems too. Add this all to the fact that many people lived within close proximity to each other in narrow streets, and you can probably get the idea of how cholera spread so quickly.

Sewage would come into contact with water that would be used for washing, cleaning, cooking and drinking. It is therefore no wonder the average life expectancy was very low during the mid 19th century.

Towards the end of the 19th century people began to live longer in part due to the construction of sewage systems which would have been beneficial in providing cleaner water, along with improved housing regulations and the removal of slums.

Next post will be on English Literature, and my review of A Kestrel for a Knave by Barry Hines, one book which I studied during GCSE English Literature. My last post was based on my improvements of understanding geography terms and concepts I studied at school.