Autism and learning how to cook

Cooking is another subject I have been developing a keen interest in, and an important part in helping me with my evolution. It is one of life’s important basic living skills. In times gone by, cooking seemed quite complicated to me, and I found certain recipes quite difficult to follow when trying to process in my mind what would be going on.  Being on the autism spectrum means my mind processes information in different ways and at different rates.

Slowly and gradually, I’d learn simple things by observing when being shown.

This, I found, can be done in as little as five minutes or so.

You start off by cracking two eggs, emptying the yellow contents into a small glass jug.

At the same time, you could toast a couple of pieces of bread for a few minutes.

Beat the yolk until it forms a yellow creamy texture

Pour the yolk into a small saucepan

Put the saucepan on a medium heat, stirring the yolk as it heats up. Eventually you should see the scramble form.

When serving I like to sprinkle some dark pepper along with some sea salt.

This, I found quite easy. It involves cooking the fish fingers from frozen for about 12 minutes on the grill at medium heat. You turn them over about halfway through cooking so that they’re evenly cooked.

The chips can be done in a microwave which takes roughly about five minutes.

The peas should be done in a saucepan at a low heat for about 3-4 minutes.

So, if you start the chips at about 7 minutes and have the peas at a low heat from 8–9 after the fish fingers respectively, all the ingredients should be ready at the same time to be served.

Once I felt confident I’d mastered this, I decided to try out what I’d consider to be more complicated cooking. 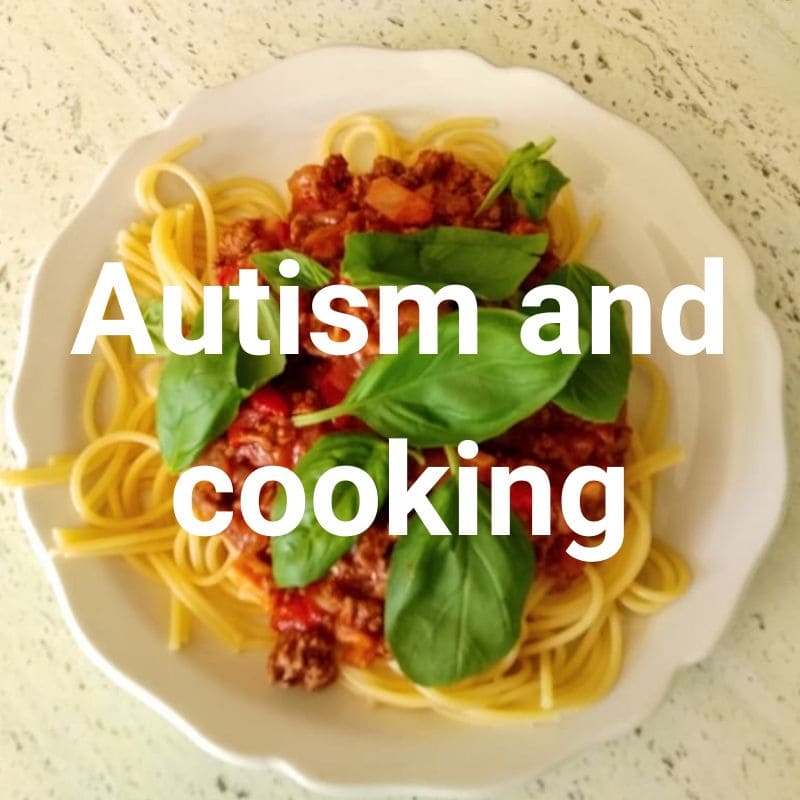 Below is the method I have adapted which I find helps me to cook this meal.

Ingredients which I use

Mushrooms (About a handful)

A pack of beef mince

How I do my preparation

Cut open the chilli, removing the seeds from its inside first before finely slicing it. I always remove the ends of the chilli itself.

I cut the onions into small pieces, but cut off the stem and root ends first. You can read about how to do this here.

I peel the garlic cloves before cutting them up finely. Read about how to do this here.

I start by putting a pan on medium heat. Following that I add about 1 tablespoon of olive oil to this, but not much more. Now is the time when I start getting some water boiling for cooking the spaghetti. A little more than 1 litre suffices.

Now, at this stage I add the onions to the pan, followed by the garlic cloves, chilli, and mushrooms, all chopped up from the preparation above.

Shortly afterwards the beef mince gets added, which changes from red to brown. Once this happens, I add the Dolmio sauce, mixing it evenly with the rest of the ingredients in the pan.

To cook the spaghetti, first I boil a kettle of water and pour this into a saucepan.

From here you can turn on the heat up to medium to high until it boils.

Place the spaghetti into the boiling water. Add a little salt to this in the process.

Cook the spaghetti for the length of time according to the instructions on the packet from which it came. During this you can let the ingredients in the pan simmer, stirring it every now and then.

At the end of the cooking time as stated on the spaghetti packet, drain the water by pouring it into a colander. The spaghetti should fall into this at roughly the same time.

You should now be able to serve it by putting the spaghetti onto the plates first followed by the mixture cooking in the pan. I added basil leaves to my spaghetti here to give it some flavour.

And just to add, any meat leftover at the end should be put into a freezer bag and put into your freezer to use at a later time.

From my experience, those of us with autism can experience difficulties when it comes to cooking. One reason for this can be the way we process information.

With observation, together with a little guidance in breaking recipes into more manageable and understandable forms, one with autism can learn how to successfully cook a number of nutritious meals.

Once one recipe is mastered, one can have a sense of achievement, and gain more confidence to move onto more complicated recipes. This is now something that goes some way to helping me overcome self-doubt.

If you’ve previously found cooking difficult, but have since gained sufficient cooking skills to do nutritious meals, please let me know below in the comments section, along with any particular dishes you feel you’re confident about.

In addition, if you choose to have a go at any of my cooking instructions here, why not let me know how you get on.

I’ll be adding some more of my favourite dishes in times to come and describe how I cook them.