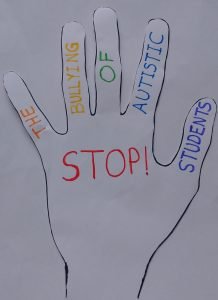 Bullying may be described as behaviour intended to threaten or cause hurt to other people, be it by physical or verbal means. It can often involve people targeting those they consider to be less powerful than them.  In other cases victims might be coerced into doing things they don’t want to.

Examples of physical bullying are hitting, kicking, pushing, damaging one’s other belongings etc. Verbal bullying can involve name calling or insulting other people.  Another type of bullying is emotional bullying, which may involve humiliating or threatening others for some reasons, spreading and telling lies about someone etc. It can leave one worried, sad and any other negative feelings besides.

The evolution of technology over the years has led to bullying online via forums and websites such as Facebook on the internet. Hurtful messages can be sent on mobile phones and on social media platforms such as Twitter and Instagram too. With increased and easy access to mobile phones having internet access nowadays, it is hardly surprising victims may be increasingly targeted in these ways.

Why people engage in bullying behaviours

People bully others for a variety of reasons, and for reasons that may make no sense. Reasons may be linked and not limited to:

Feelings of insecurity and then trying to act tough.

Experiencing bullying themselves and want to take their anger and frustrations out on others, particularly those they perceive to be weaker than them.

Being jealous of someone because they’re good at something in particular.

Lots of us will have experienced bullying to some degree at various times in our lives. However, certain people are more vulnerable to bullying than others. And this is true for those of us on the autistic spectrum. Below are some characteristics of autism and how they related to my experiences.

I was a rather quiet and shy individual, and sometimes spent lunch times in quiet areas of the school on my own, particularly towards the end of my time at senior school. I also didn’t want the embarrassment of people seeing me on my own and belittling me for it. Having said that, there were others who I judged to be of a more kind and caring nature, making school life more manageable in that respect.

Protecting those with autism against bullying

One could help you or help you to stick up for yourself. For example someone should be on hand to say to you something like, “They’re only teasing/joking,” or to the perpetrators, “Please don’t do that.”

For anyone who engages themselves in bullying activities, please stop and think!

How would you feel if it was you, a close friend or a loved one of yours on the receiving end of the bullies’ actions? We should look out for one another, so that we can live together more in harmony.  Whenever I think about the times when people weren’t so friendly to me, I turn to thoughts regarding all the people who have been good to me. This helped me to realise I’ll meet plenty of good people in the world. And if anyone finds themselves being bullied, it's not their fault. The fault lies more with the bully than the victim. It's also important to talk to somebody you can trust.

Please feel free to share any of your experiences, if you wish, in the comments sections and any advice used to prevent any bullying of one on the autism spectrum.

2 comments on “Autism and Bullying”